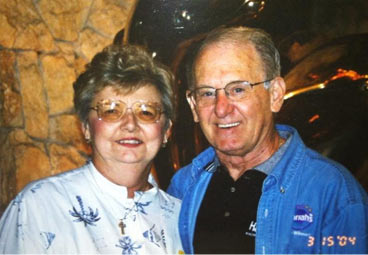 John William Hemmings was born in Charleston, W.Va. on August 28, 1939. John’s parents were Marian and James Hemmings.  He had one sibling, his older sister, Jo Ann. John’s father was in the Air Force and his last tour of duty was in Fairbanks, Alaska, where John graduated from high school.  After graduation, John got his first job filing checks at a local bank. Thus, John’s career in banking industry was borne.

When John’s father was diagnosed with emphysema, the family relocated to Arizona.  At 18 years of age, John went to work at a bank in downtown Phoenix  as a night shift bookkeeper.  His talent for banking was recognized by management and he was placed in a training program and became a teller/vault teller at a local branch.  There he met his bride, Mary Ann, who was also employed at the branch as a proof operator.  Their first date was to the Arizona State Fair. They married March 3, 1962 only 4 short months after their first date.

John was drafted into the Army in June, 1962. He attended basic training at Ft. Leonard Wood, Missouri. His first tour of duty was  at Ft. Richardson, Anchorage, Alaska. His wife joined him on their first year anniversary.  Upon his discharge from the Army, he and Mary Ann returned to the Valley where John returned to his former employment with a local bank.  Again, management had an eye for John’s passion for banking.  He was placed back in to a training program and later in to a management training program.

He was employed by a privately owned bank in Casa Grande, as Vice President. After a short time, when the bank president retired, John became President and CEO. He was so proud to be banking second generation families. When he first joined The Bank of Casa Grande Valley (aka Sunstate Bank and now known as Great Western Bank)  they had 2 branches. 15 years later, when he passed away,  The Bank had expanded to 10 branches.  He was a community activist, a church benefactor, devoted family man, friend and mentor to many in Pinal County.
John was diagnosed with COPD (Chronic Obstructive Pulmonary Disease) in 1991. In August 2004, three short days after his 65th birthday, John was diagnosed with stage 4 lung cancer. He passed away December 15, 2004.